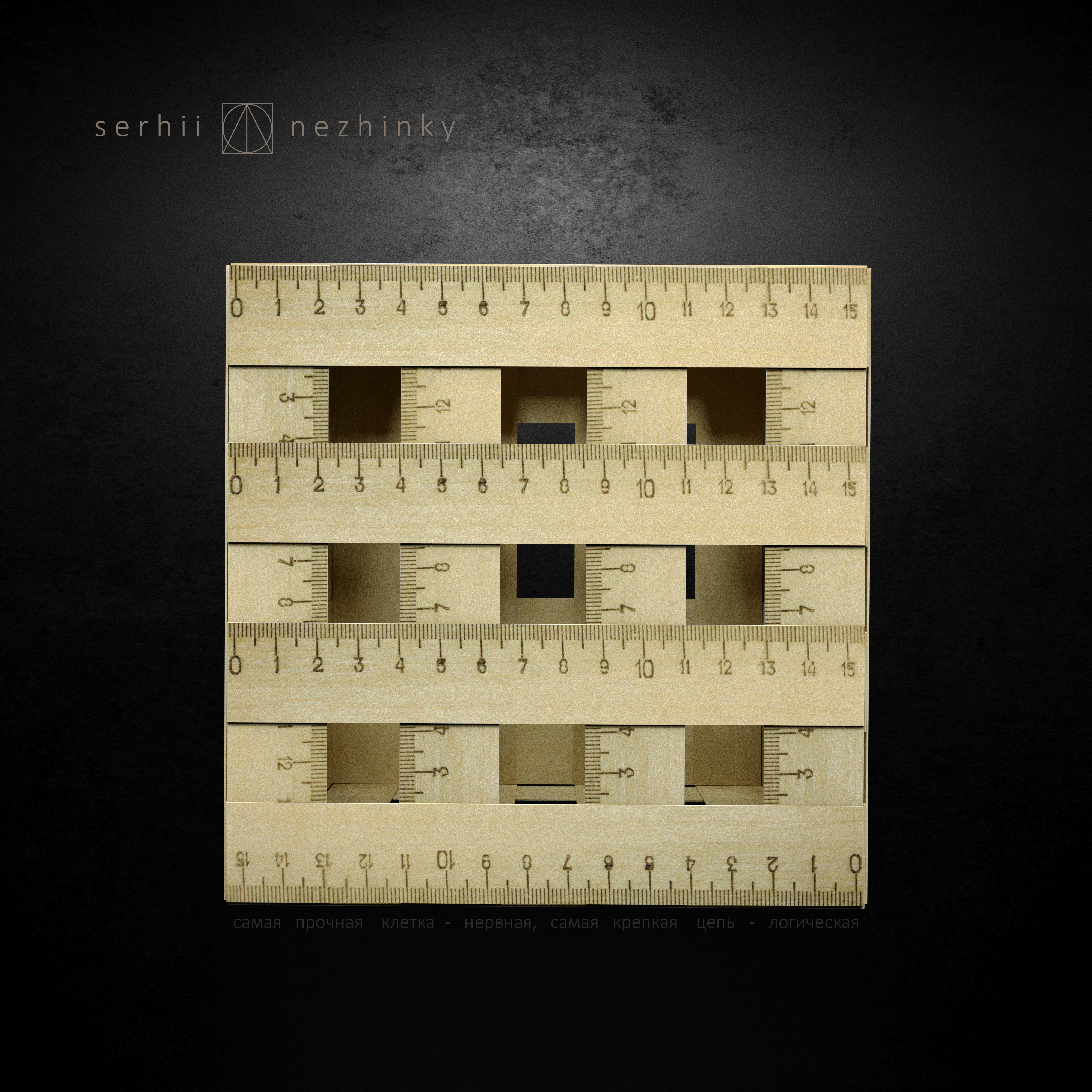 The theme of the project I submit is determined by the definition of the term “art”, which, according to the explanatory dictionary, is nothing more than a representation of reality in artistic images. Consequently, the project, in order to remain within the scope of this definition, directly or indirectly, should answer the following questions: what is the reality that art needs to reflect and what distinguishes the artistic images from any others. The answer to both these questions is, both in the very essence of the works, and in their interdisciplinary nature. The aim of the project is to define and systematize basic definitions, without which art and phenomena, inextricably linked with it, are impossible, as such, as well as the study of the nature of reality and the extrapolation of their results to the practical plane.The project is called FOSFEN (PHOSPHENE) – (phos light + phaino show) a visual sensation of colored images that occurs without the influence of light on the eye; what we “see” without eyes. Slogan: The God of illusions is an illusion of the absence of illusions. 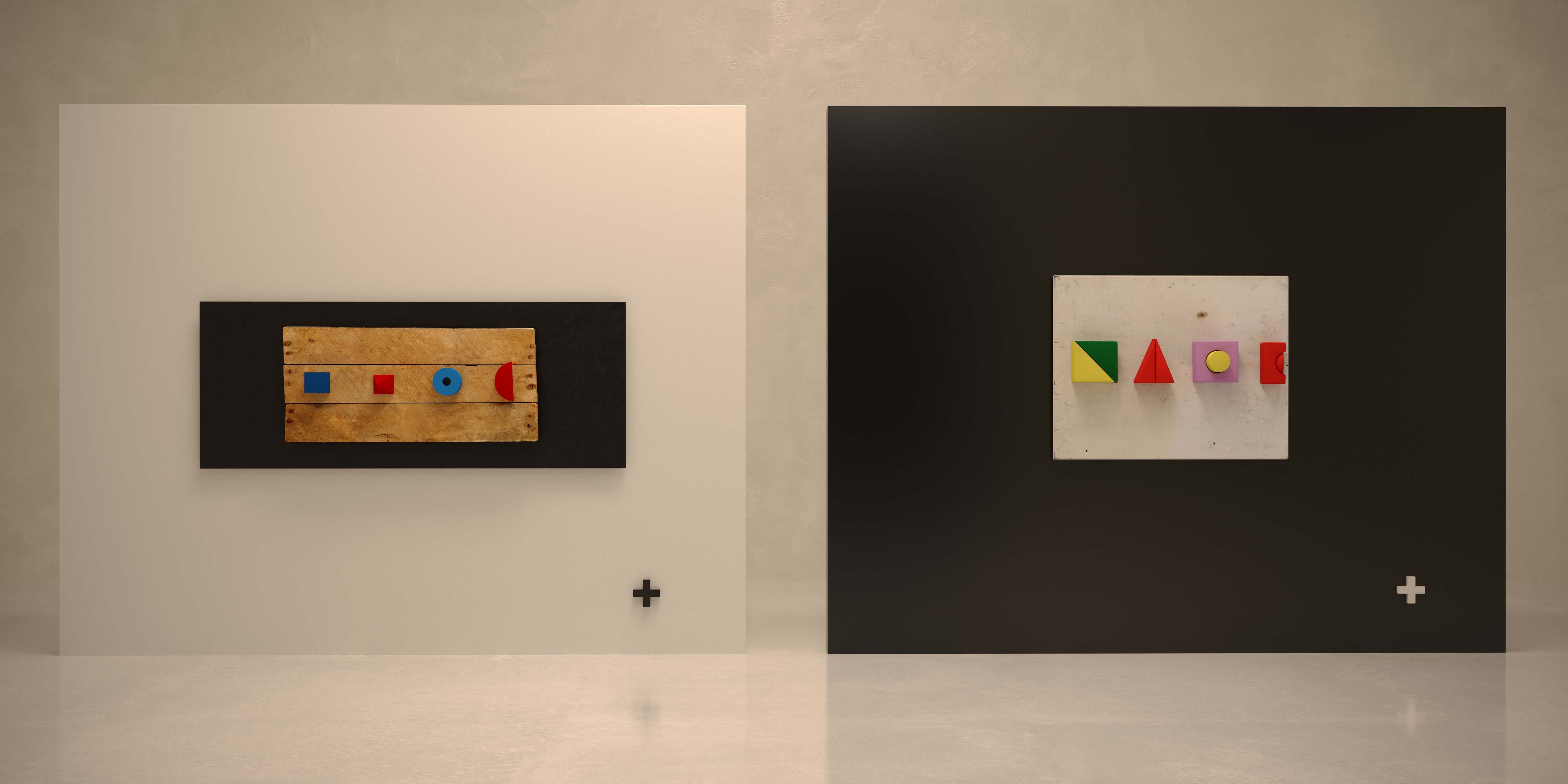 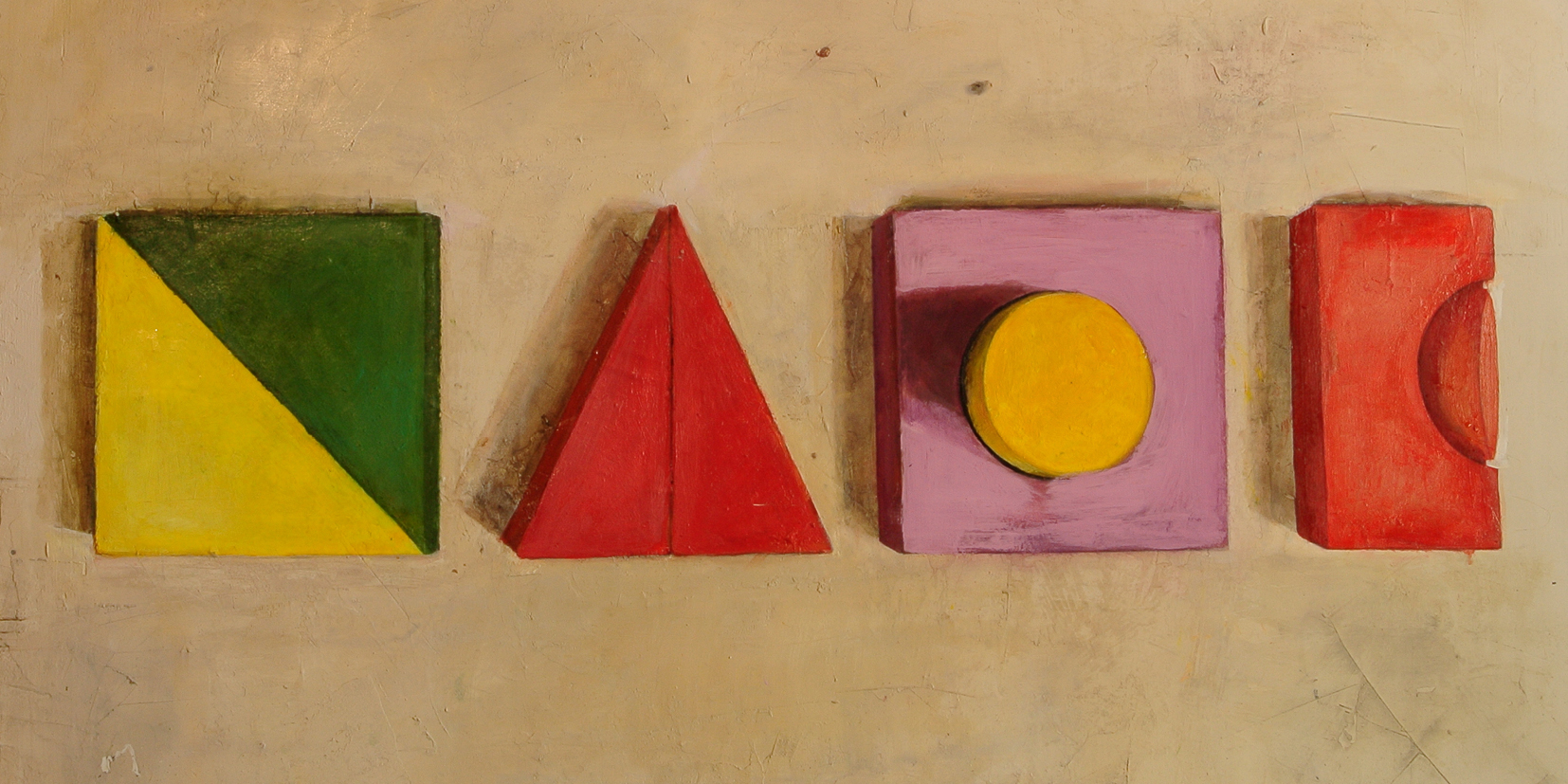 Each figure of the work has its own semantic and color meaning: A square (black) is a space, a place, something precise (since it is precisely determined by the formula of the area of ​​a square); The circle (white) is a matter, a thing, something that is in space, something not exact (since the formula of the area of ​​the circle includes always the approximate number of Pi), the Triangle (gray) is information, the mediator, knowledge integrating into a triune essence the notion of space and things that are in it and Semicircle (red) – the process, time, the desire of the thing to its fullness, expressed in rest, in some energetically most favorable state, or, if you prefer, in thermodynamic equilibrium. There are 4 components, of which reality consists. The sum of these 4 elements forms a quintessence, the 5-th element is the meaning arising in the process of their interaction – the Greek word “CHAOS”. Where X is a square, A is a triangle, O is a circle, and C is a semicircle. Thus, reality gets its description. 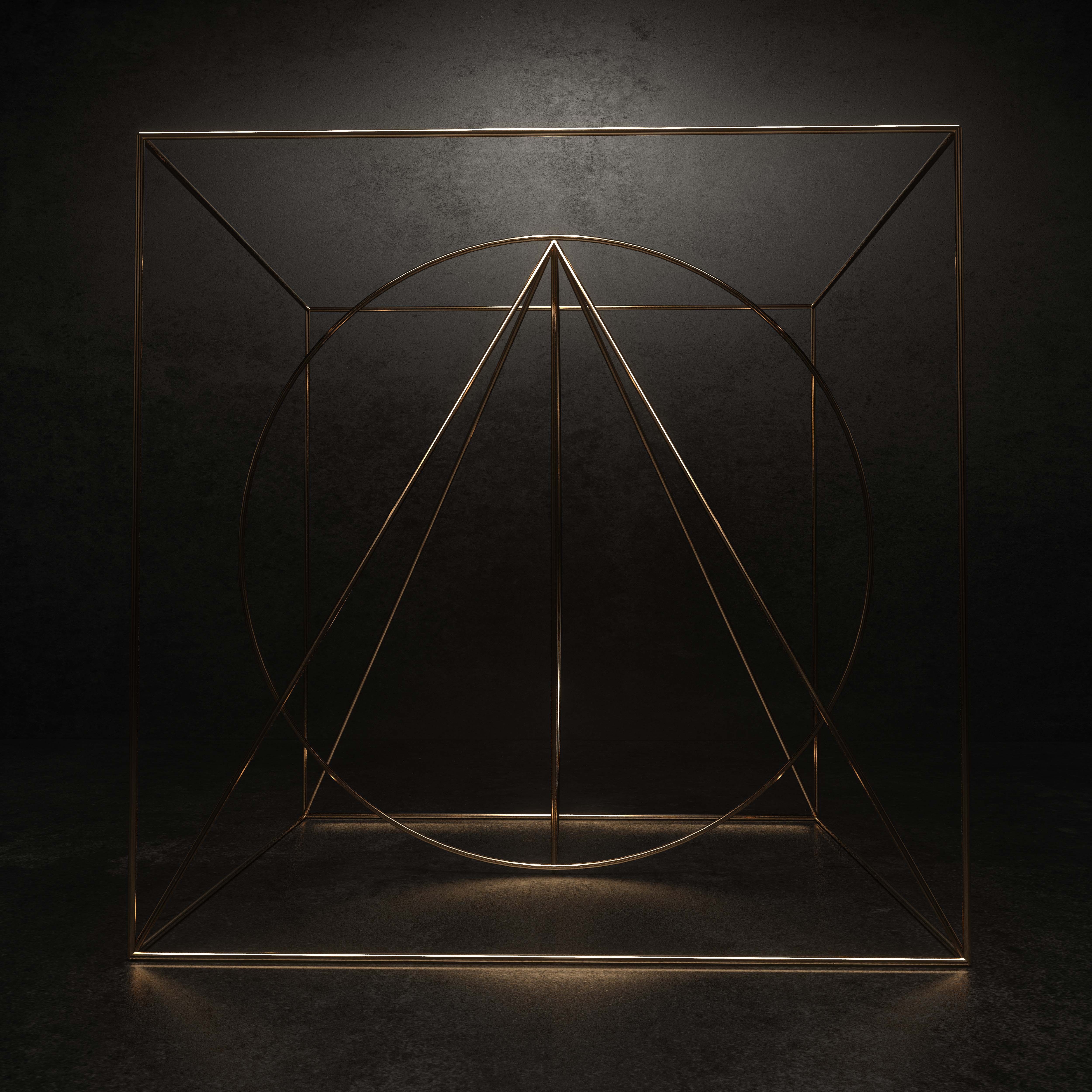 “The world is chaos – emptiness manifested against the backdrop of a delusion about the existence of the system.” Evolution of the sequences leading to this idea looks like this: If something is a system, then chaos is nothing. The system is not possible without borders, there is no border – there is no system, using the principle “there is something without which it does not exist,” we put an equal sign between the system and the border. Consequently, chaos, being an antonymic system, is unlimited, and therefore includes a system, because it cannot be limited by anything. 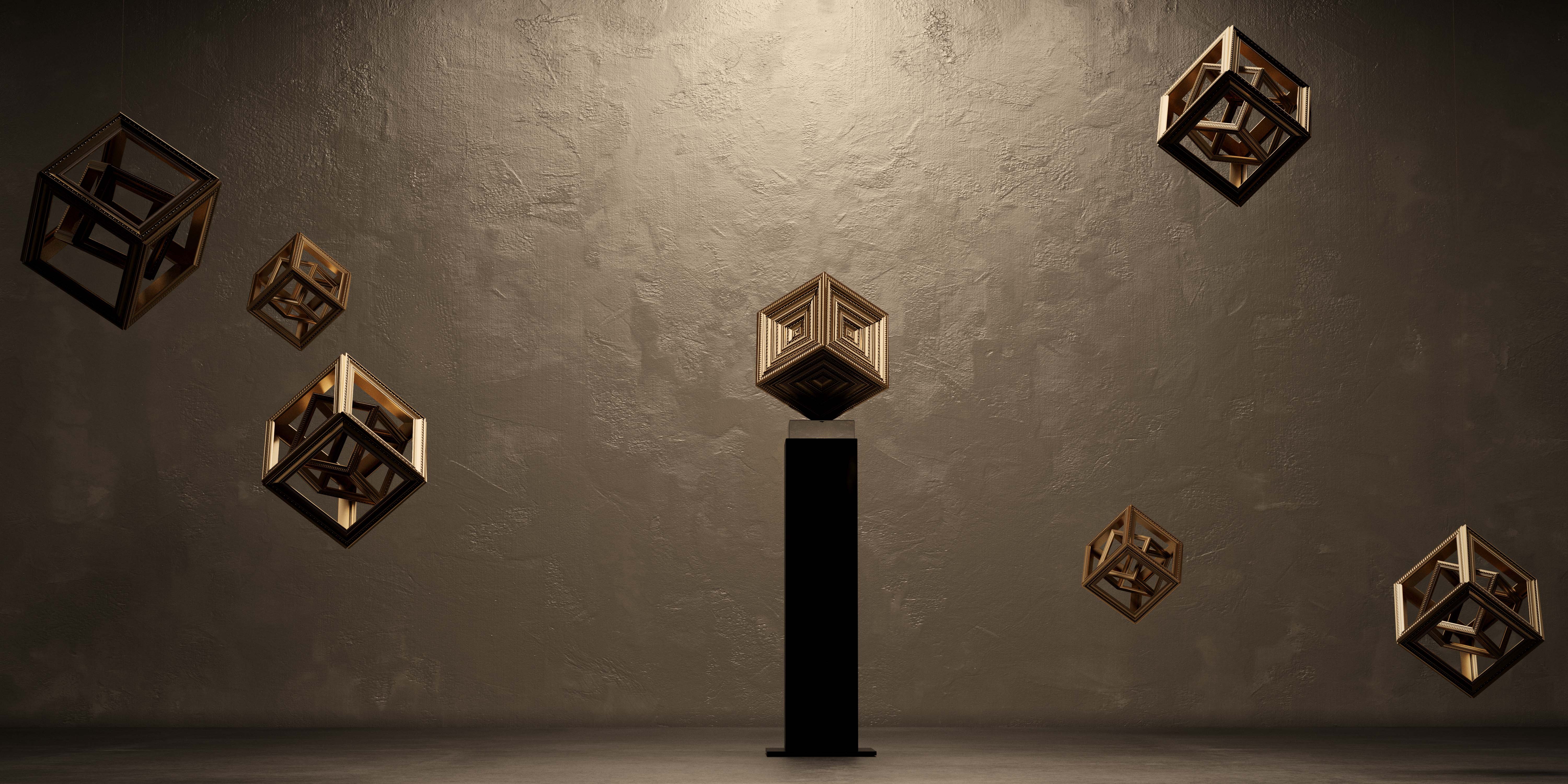 In the image, the cube is made of picture frames. It symbolizes a reality consisting entirely of a set of perfectly conventional boundaries. If a thing is impossible without boundaries, and it can be divided endlessly as one, it means that it does not represent anything beyond borders. The very same boundary is not a material object, just as the picture frame is not part of the image. 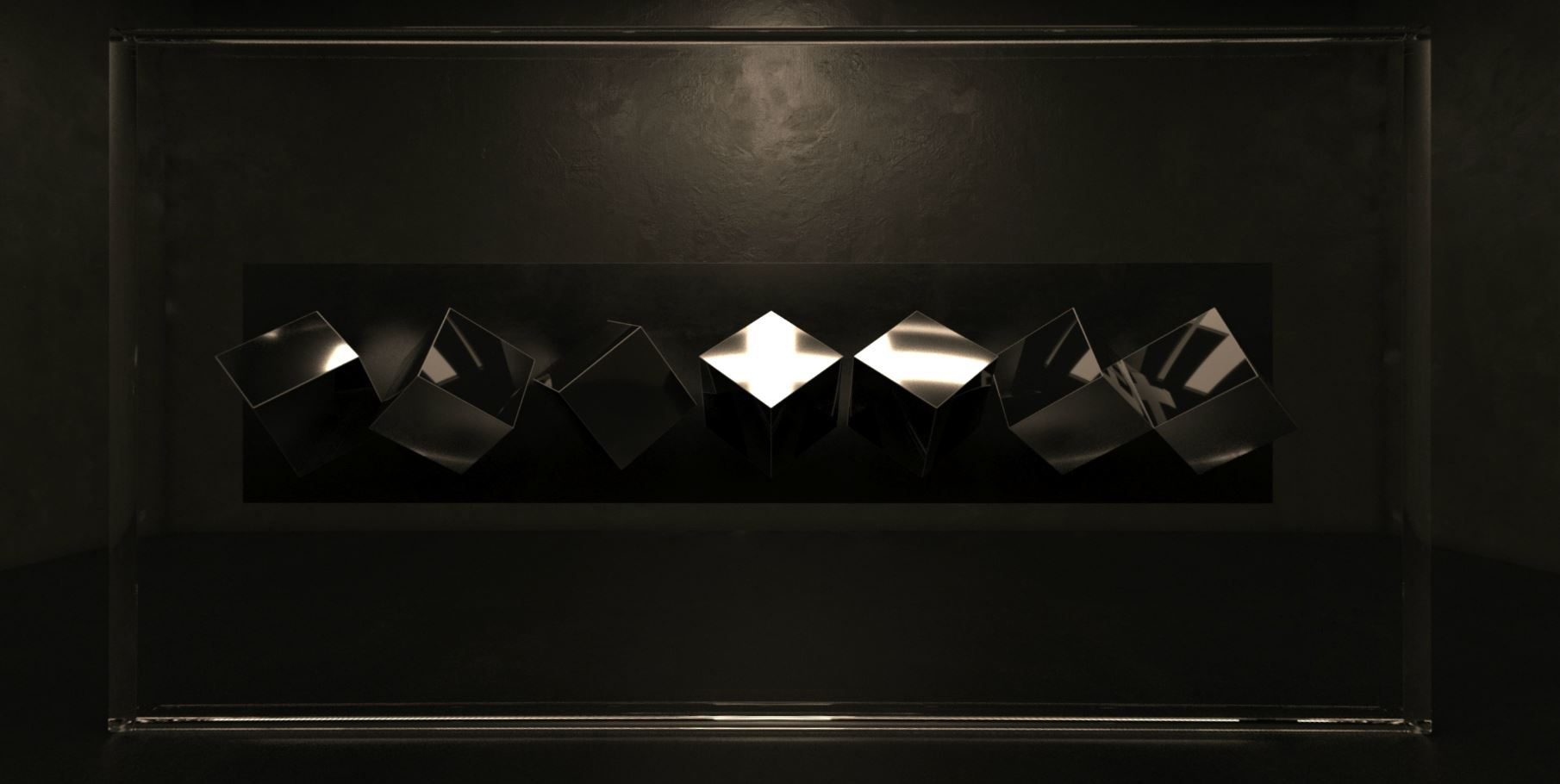 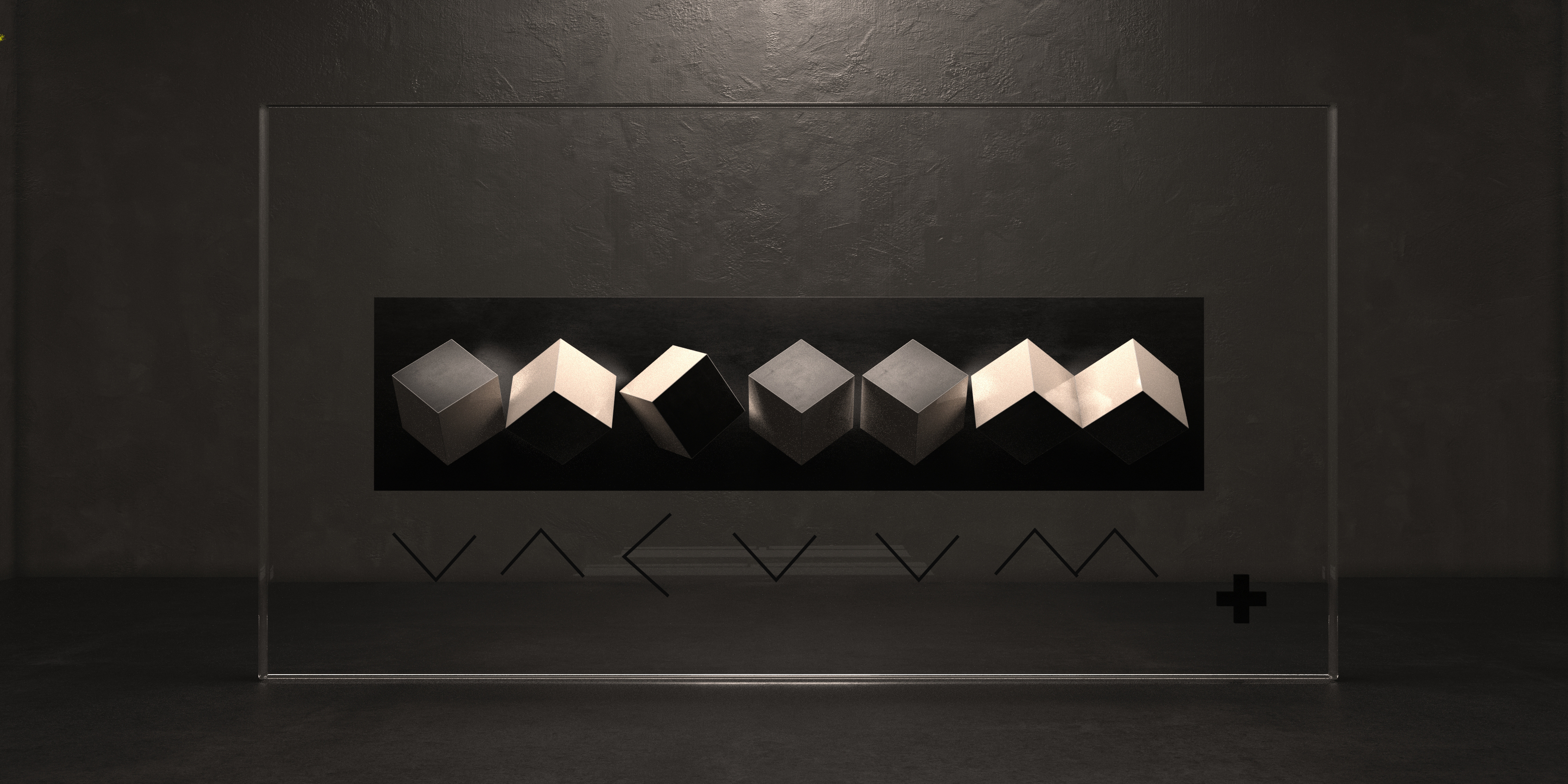 The work of “VACVVM”. The faces of the 7 cubes, facing the viewer in a certain way, form the word “VACVVM”. The face of the cube is the conditional axes of the three-dimensional coordinate system, where the cube itself is a space, a void. In this case, the word “vacuum” in Latin is also translated as “emptiness”. As a result, we have conditional, that is, an objectively non-existent emptiness of matter, expressing the objectively existing emptiness of space. The same pseudo-paradox is observed in the case of the work of “Chaos”, where disorder is expressed by strict geometric systems. It is also not accidental that the word “chaos” is interpreted in dictionaries as a primitive emptiness and, in fact, translates the word “vacuum” from Latin into Greek. 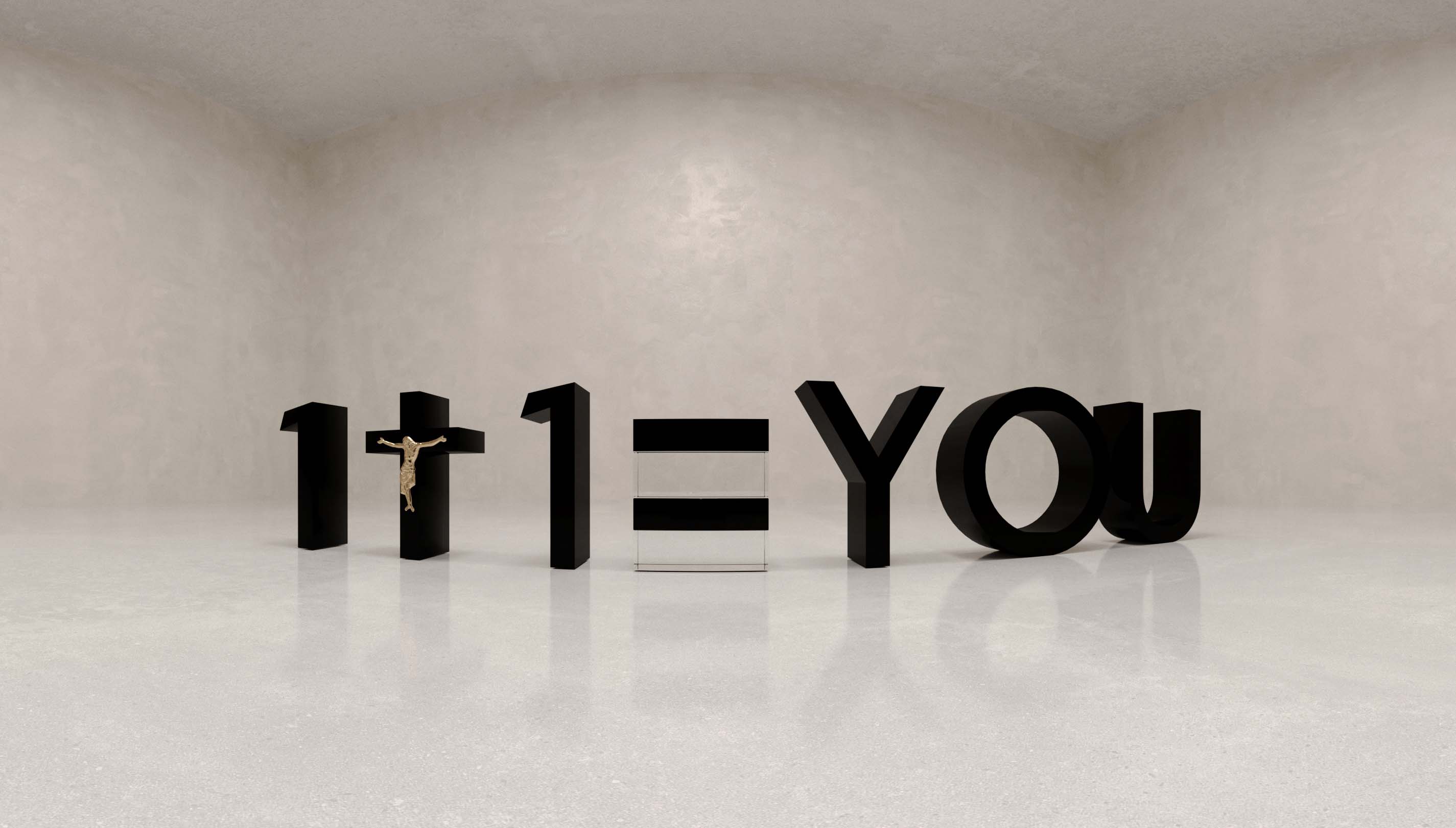 Any thing can be described by the following mathematical expression: 1+1=2, where 2 is a thing itself, and 1+1 is its composition, relations between parts of which are marked by the character of «+».

A thing is relations of things which it consists of.

Objectively there are no relations between things.

Consequently, what a result will be after equal, that is one or another thing, depends exceptionally on our attitude to it : 1+1=YOU

Fransua Viet, a creator of the symbolic language of algebra, who lived from 1540 to 1603, associated a plus with the Maltese cross, that is with the Christian character of faith. Thus it is firmly established in the Bible, that faith even as small as a mustard grain makes a man all-powerful. Such omnipotence illustrates the above-mentioned example with a change of a thing (of reality, as an aggregate of things) by means of change of attitude to them.

The world is such while we trust, that it is such. It will immediately become a different one, as soon as our faith (+, relation) will change.

Without a difference not a single thing’s existence is possible.

A man is also a result of this difference. He, as well as all things, is in an intersection of these two segments. «Crucified» on them.

Thus a cross here is exactly a crucifix symbolizing suffering because all existing – is limited, and narrow-mindedness is an essence of any dissatisfaction. 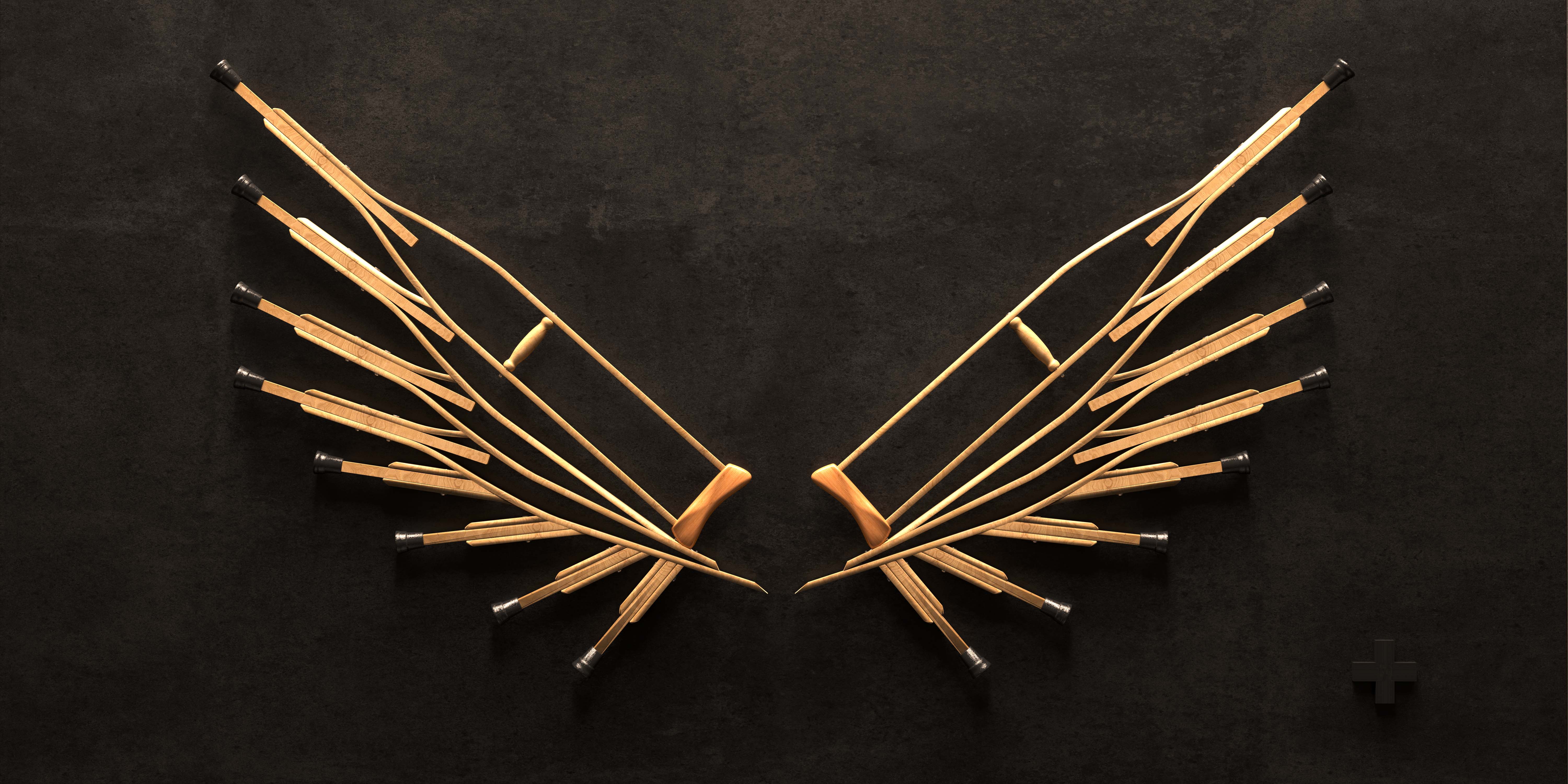 Wings-Crutches. “A real journey is made only within” – this principle can be considered one of the fundamental principles of the project. People, like missiles, are of two types: the Earth-Air system and the Earth-to-Earth system. If the human consciousness is nailed to the Earth, there is no difference how far from it will be his body. Just like in the case of other ideas, this idea also has a variety of implementation options. For clarity, their simplest embodiments are shown here. 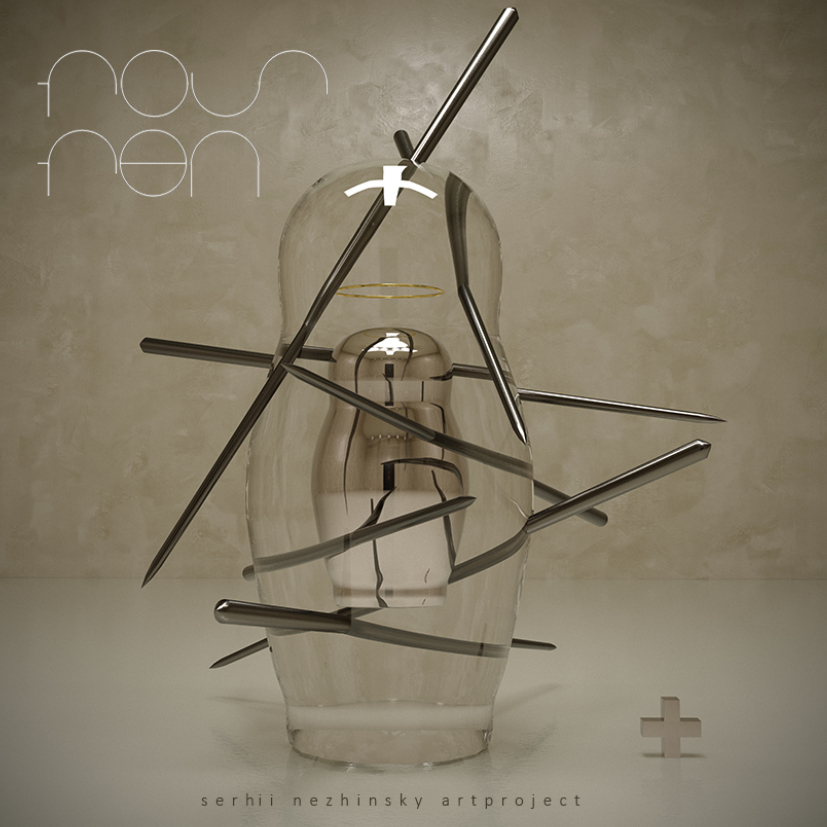 The sculpture of St. Sebastian as well as the “Wings-Crutches” is an expression of the idea of ​​the predominance of content over the form. The transparent body does not hide the soul (mind). The soul is holy (right), for being a mirror reflects only reality. Knowledge, as a reflection of reality cannot be refuted, all the more affecting its carrier physically (arrows beat past the inner figure). Knowledge symbolizes the golden halo – the light emanating from the head. If the sculpture is placed on the street, soon seven iron arrows in the rain will start to rust and rusty streams will pour on the surface of the glass body. 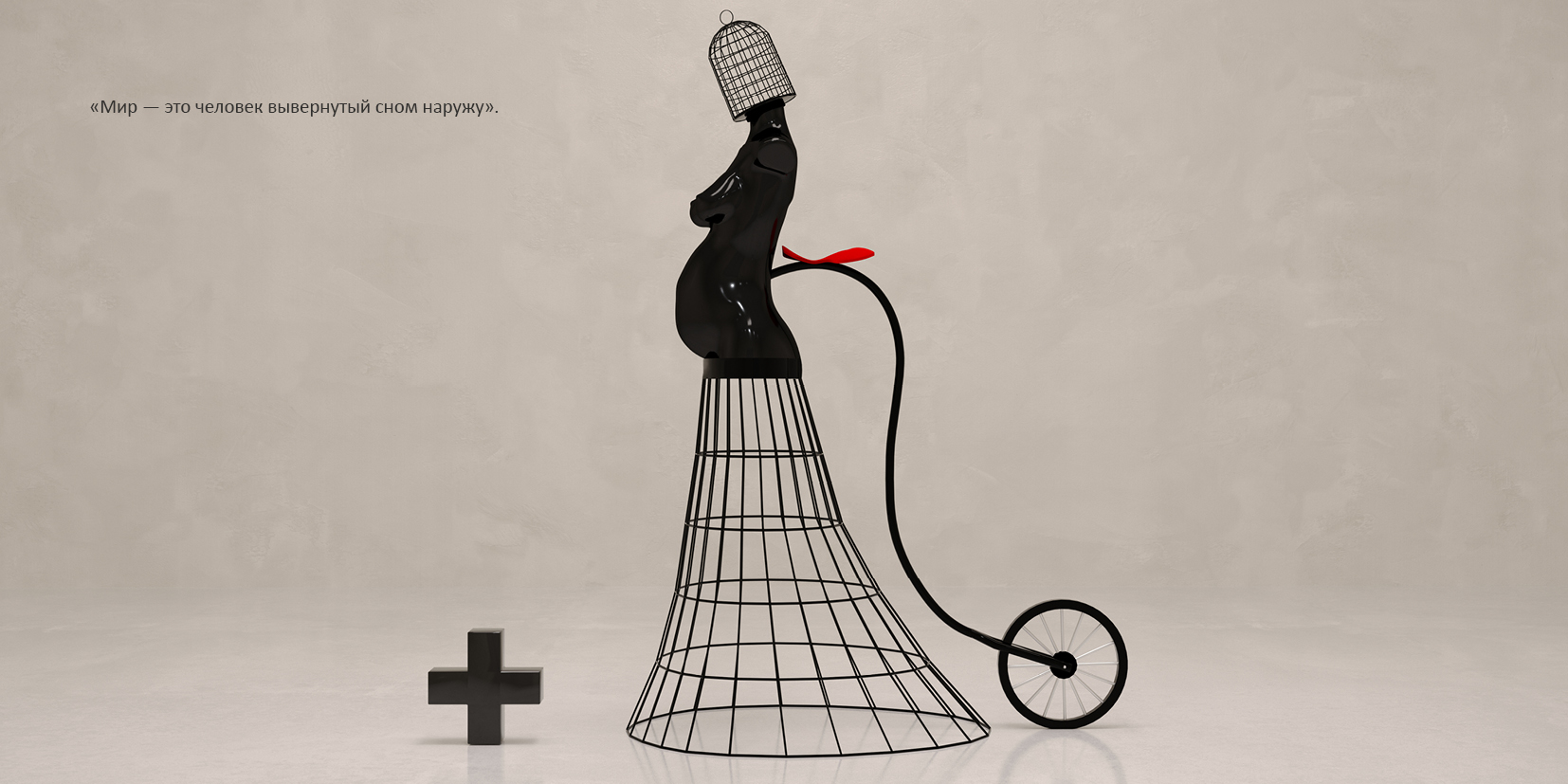 The world is a man turned by a dream outside. The process of producing art objects is as follows: first sketches of the work on paper are made, their description and explication are written, then a 3D model is created and appropriately textured. The next stage is the real embodiment of the work. When the work is realized, it is again digitized in a new quality, taking into account all the changes and is placed in the virtual gallery room (http://www.nezhinsky.com/fosfen/fosfen.html).

At the moment, work is under way to move the 360 ​​° -gallery into the virtual space of the game engine, which will allow complete freedom of movement through its halls, including with the help of virtual reality technologies, as well as dynamic lighting and sounding, animation of objects and interaction with them will become possible. Real objects will take their place in physical galleries. Work on the project, in total, has been going on for more than 3 years. 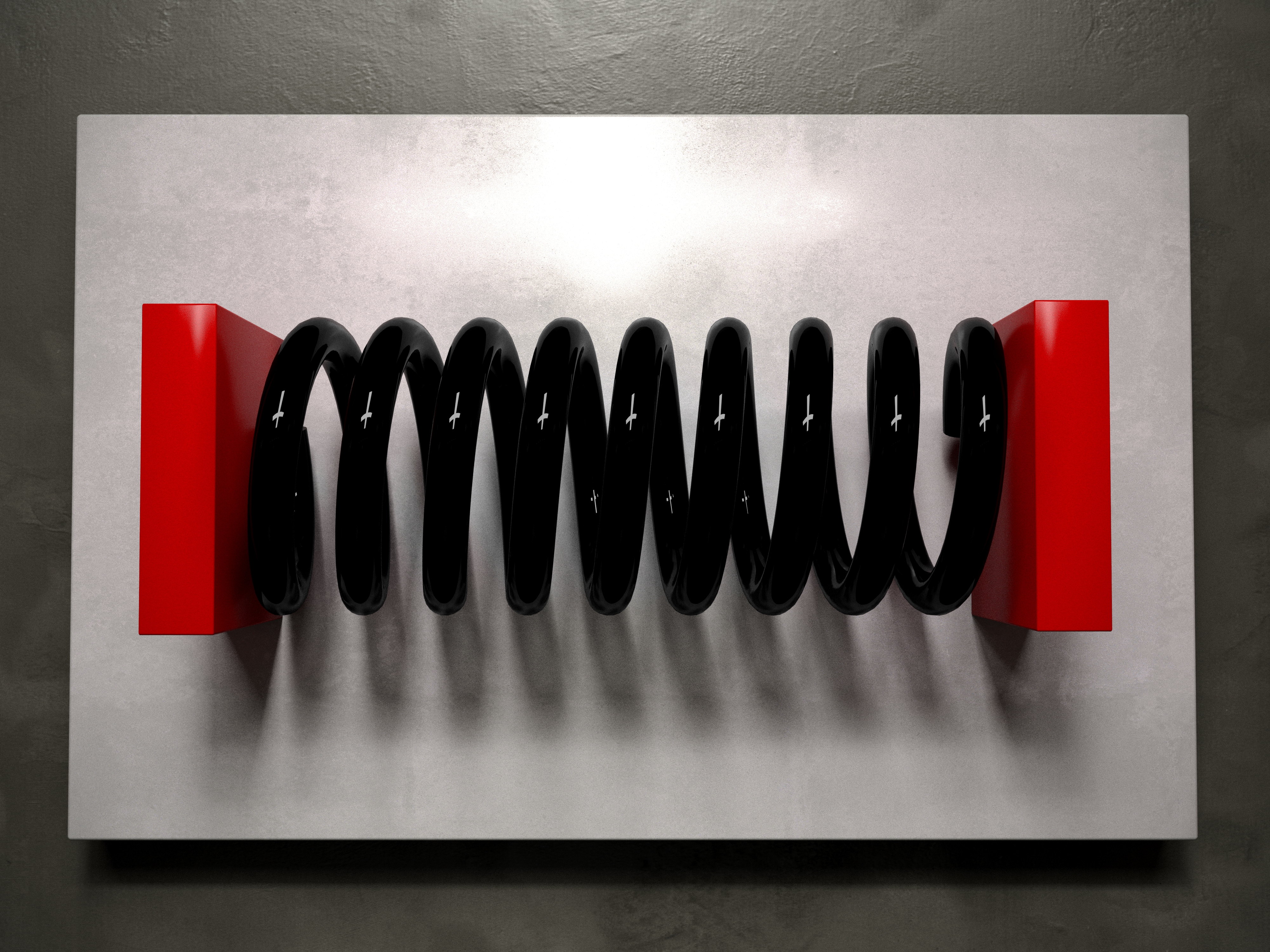 “Canned Prana.” The author’s energy transferred to the spring, sandwiched between two locks, is a pure art where the spring itself plays a purely nominal role, performing the function of a kind of picture frame that is not part of the work. The compressed spring denotes the unit of man-time, energy, life, which will be disembodied, it is only necessary to release the spring from the locks. Such disincarnation is associated with liberation, enlightenment, the death of man, the dispelling of dust to the wind. Colors of structural elements, as well as the number of coils of the spring is not accidental and for each individual work its own. So, for example, a black spring with 9 turns, sends us to the famous work of Dante. Such design is not meant to bring, but to emphasize already existing important characteristics of the product itself – energy. 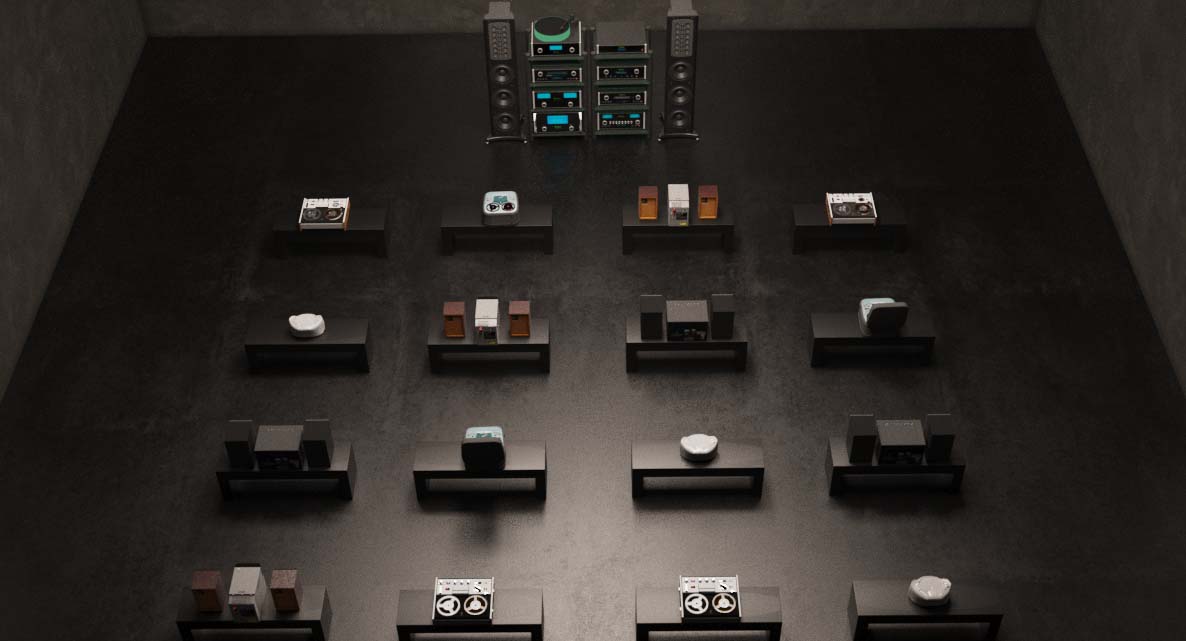 Among other works there is one that I refer to the genre of “sound installation”. These are tape recorders on which common sounds made by the public in the hall are recorded – rustle, coughing, whispering. Before them, on an improvised stage, two or more tape recorders reproduce the replicas, which are synchronized so that it seems as if they are talking. In the original version, this is a poem from Maximilian Voloshin’s “The Tragedy of Material Culture”, but in fact, any anthological text is suitable. The task of the installation is to make the public think about the fact that maybe a person is a tape recorder, to which someone’s ideas are simply recorded.